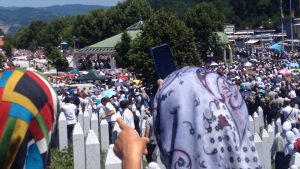 “So, on behalf of my country and from the bottom of my heart”, 2019, video still

Dasović’s artistic practice is focused on the rhetorical structures that make genocidal violence visible and on those deployed to obscure politically inconvenient aspects of such conflicts. She asks: What ideological narratives do representations of violence participate in on a structural level? What forms of trauma are such documents unable to cope with, either in the legislative arena or when constitutive of the archive? Here, the archive serves both as a physical place for these documents and a metaphor of collective humiliation and remorse.

So, on behalf of my country and from the bottom of my heart, 2019
Mixed media installation, video, multi-channel sound, text
The presentation of the work is funded by Mondriaan Fund

On 11 July 2015, Anna Dasović attended the burial of 136 people in Potočari,
a town located in Republika Srpska, Bosnia and Herzegovina. This is an
annual event to commemorate the genocide that took place in Srebrenica in
July 1995 and to lay to rest the remains excavated over the course of the
preceding year from mass grave sites. It is the only annually televised mass
funeral in the world.

In 2015, the assembly also marked the 20-year commemoration of the genocide. Dasović’s work So, on behalf of my country and from the bottom of my heart brings together images of the burial from news media, found mobile phone footage, and video material that Dasović shot with her own phone.

The montage traces the rhetorical and physical movements of Bill Clinton and Aleksander Vučić, the Serbian Prime Minister in 2015 and now President of Serbia, who had been a member of the ultranationalist Serbian SRS party in 1995 and who still refuses to publicly acknowledge the genocide. The popular protest that erupted was quelled by security forces and a Muslim community leader, who asked that people remain focused on the work of mourning. Relatives that attend these annual burial assemblies – many of them survivors of the massacre – find the space for their political dissent atrophied and their grief marginalised.