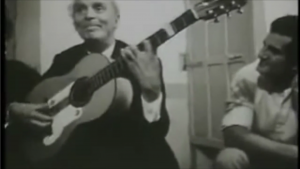 Daniel Seymour is a contributor to Bergen Assembly.

Intrododuction Days, 6.4.2019
Daniel Seymour: Flamencologia, 1970 (video, 20’)
In 1972, after attending the Encuentros de Pamplona (The Pamplona Meetings, a contemporary music event), Jessica Lange and Paco Grande visited their friend Danny Seymour in Setenil de la Sierra. There they discovered that one of the stars of the avant-garde encounter, flamenco guitarist Diego del Gastor, was based nearby, where he followed his personal way of life. Darcy Lange, one of the guitarist’s pupils, used to say that Diego del Gastor had not only managed to make flamenco gatherings a job, a way of earning a living, but also and undeniably a manifesto of autonomy and political challenge. Danny Seymour filmed these sessions in two experimental sequences that include a philosophical speech by Diego del Gastor himself on his understanding of life: one in the actual town of Setenil and another in the country house known as el Cortijo Espartero, a true factory of lumpen productivism that Dan Graham has compared to Andy Warhol’s Factory.