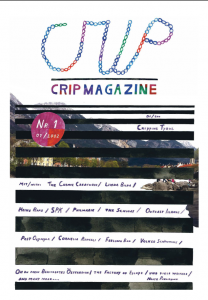 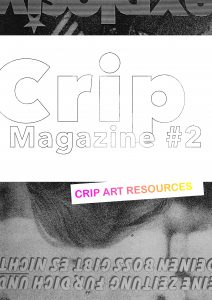 Eva Egermann works with different media and collectives, such as the Manoa Free University, following a process-oriented approach. She has previously taught at the Art Academies of Vienna, Linz, Lucerne and Kassel, and was research fellow at the University of California, Berkeley. Egermann has been awarded several prizes for work related to her practice-based PhD on ‘Crip Modes of Artistic Research’. Her practice embraces a wide variety of media and materials, from artist publications to exhibitions (including On Uncanny States and Bodies, a group show curated by Egermann at Lakeside Kunstraum in Klagenfurt, Austria in 2013), and artworks in the form of installation, video or performance (such as An Outcast Night, 2013, 2015).

Crip Magazine is a self-published magazine project initiated by artist Eva Egermann. It explores forms of representation that oppose the conditions of normality/abnormality. The magazine is released on an irregular basis; the first issue was published in January 2012, while the second followed in May 2017.Together with a presentation of past issues and related projects, a new edition of Crip Magazine will be produced collaboratively throughout the course of Bergen Assembly 2019.

Crip Magazine comprises theoretical as well as artistic contributions on subjects such as crip pop culture, the history and presence of radical crip movements, and subcultural, left and queer contexts of disability. It assembles cultural artefacts of a trans-historical crip (sub)culture, visual activism and crip art resources. Its contributions deal with pain, opening up a transformative perspective on dis/abled body issues and bodily relations. Crip Magazine embraces historical struggles, aiming to create trans-temporary connections and communities across time.