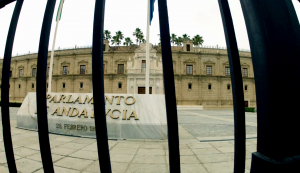 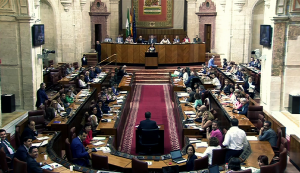 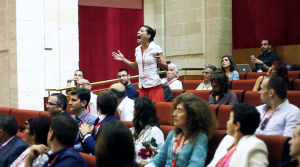 “Flo6x8 is a collective of activists with links to the flamenco world, who have carried out a series of surprise actions at various banks over the past few years, using flamenco – the quintessential Andalusian form of expression – to highlight the banking industry’s responsibility in the financial crisis. This time, however, they set their sights on the Andalusian parliament, which was holding its last plenary session before the summer break, and launching the new ‘Seat 110’, intended to promote citizen participation. Three flamenco singers, two women and one man, interrupted the session when the spokesperson for the Socialist Group took the floor.”

This description, taken from the Flo6x8 website, sheds light on the activities of this anonymous group with a changing, mutating membership. On social media they use guerrilla communication tactics, and in their local community they revive the art of direct action. Their ‘attack’ on the Andalusian parliament broadened their scope. They had protested against the alliance between professional politicians and international capital in the last financial crisis, and they were now calling for an overhaul of the system of democratic representation: constitutional reform, direct democracy, removing politics from the bureaucratic system, etc. The intervention was not just a protest action: flamenco, with the celebration and tragedy that it represents, occupied parliament as a ‘representative’ agent, at least as representative as the agents chosen through the spectacle of elections and the rules of the electoral system. It is an interesting symbolic struggle over what it means to be represented. In this intervention, Flo6x8 turned the tables on the symbolic use of flamenco as a sign of identity by professional politicians and used it as a weapon against them – a silent scream in their ears.