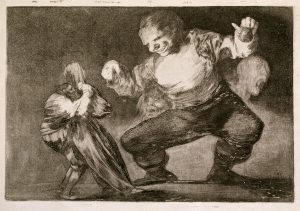 The selection of Goya’s Los Disparates presented here radicalises one of the characteristics of Goya’s late works: the depiction of oneiric, festive or carnivalesque scenes with strong, often enigmatic, political content. Goya found himself up against the moral, edifying readings of his first series of prints, Los Caprichos, and tried to circumvent the pedagogical moralising under which the Enlightenment sought to classify his works. In Los Disparates he tried to make drawing self-confined, to say what it says, without dictating particular or instructive points of view. Due to the oft-mentioned ambiguity of these works, their interpretation has run the ideological gamut from the right to the left and vice versa, but Goya simply formulated questions and opened up politically pertinent issues and debates. He wanted drawing to be a polyphony of voices and notions, a medium through which to multiply perspectives and points of view. In this sense, dreams and fantasy became a pretext allowing him to combine different worlds and seemingly ‘nonsense’ scenes. He confined himself to drawing, not the written word, not discourse, not the law. Marginal, underclass characters (majos, Roma, witches, bandits, prostitutes, pimps, criminals) often feature in the vignettes. The women, men and monsters dancing in a circle (no. 12) or being tossed into the air on a blanket (no. 1), for example, illustrate popular games, but they also refer to the revolutionary times they lived in, and the swapping of roles that went with it. Goya’s festive, humorous scenes thus became vivid calls to political action (not just opinion) and invitations to try new forms of life.

Aside from being the painter and printmaker we are familiar with, Francisco de Goya was also probably the greatest European intellectual of his age (the age of Jean- Jacques Rousseau, Immanuel Kant and Johann Wolfgang von Goethe). His artistic and political adventures are widely known, so we will mention only that he died in exile and when he was disinterred for reburial in Spain, his skull was found to be missing. The prints presented here are a casual selection from the holdings of the KODE Art Museums and Composer Homes in Bergen (numbers 1, 4, 8, 9, 12, 13 and 17, according to scholarly convention), which have had a profound impact on the sense and meaning of political parties.

The interesting thing about these drawings, made by Rosario Weiss on the back of the notebooks belonging to her godfather Francisco de Goya, is the possibility that they may well be comments on her teacher’s drawings on the front of the pages. In many senses, the dream-like quality of her childish doodles influenced Goya’s own fantastical imagination. On one side, Goya painted a feral soldier; on the back, Rosario drew a woman with a fan. A tattered, ghostly monk is by Goya, and the two dead monks on the back are by Weiss. A comfortable sled seems to have been the girl’s response to the outlandish figure that Goya makes shout that he is very tired.

Rosario was barely ten years old, and Goya was fascinated by her drawing skills. As such, these sketches seem to suggest playfulness between master and student, a version of the game of opposites, the world upside down, and other ‘nonsense’ expressions of the kind that so interested Goya near the end of his life. These drawings are dated just before Goya went into exile in France (accompanied by young Rosario and her mother, who was probably his partner at the time). When they arrived in Bordeaux, Goya secured a position for Rosario as apprentice in Claude Joseph Vernet’s studio, and then as a student in Antoine Lacourt’s academy. Goya’s commitment is significant, given that it was unusual to support a woman embarking on a career as a painter. Goya insisted on Rosario’s artistic professionalisation with extraordinary passion and vehemence (it has been suggested that she was his illegitimate daughter), aware of the politically transgressive nature of the gesture at the time.