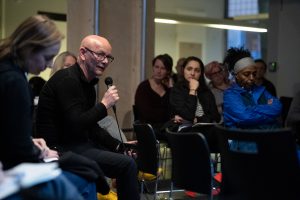 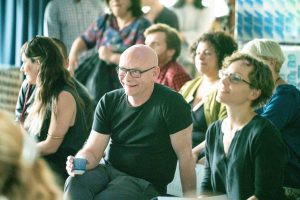 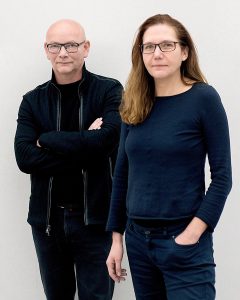 Hans D. Christ and Iris Dressler, conveners of Bergen Assembly 2019, have been the directors of the Württembergischer Kunstverein (WKV) in Stuttgart since 2005. One of their priorities is the exploration of collaborative, transcultural and transdisciplinary practices of curating.

They have presented solo exhibitions by artists such as Imogen Stidworthy (2018, with Katia Krupennikova), Alexander Kluge (2017, with La Virreina Centre de la Imatge, Barcelona, at La Virreina and WKV), Ines Doujak (2016), Pedro G. Romero (2012, with Valentín Roma), Teresa Burga (2011, with Miguel Lopez and others), Peggy Buth (2009), NOH Suntag (2008), Daniel G. Andújar (2008), Anna Oppermann (2007, curated by Ute Vorkoeper) and Stan Douglas (2007, with Staatsgalerie Stuttgart). Recent group exhibitions include 50 Years after 50 Years of the Bauhaus (2018), Tito’s Bunker (2017, with Biennial of Contemporary Art Sarajevo, at Tito’s Bunker in Konjic and WKV), The Beast and the Sovereign (2016, with MACBA, Paul B. Preciado and Valentín Roma, at WKV and MACBA), Acts of Voicing (2012, with a core group of twelve co-curators) or Subversive Practices (2009, with a core group of thirteen co-curators).

At WKV they have created an open platform for the activities of local activists and artistic groups. Christ and Dressler both teach regularly and have published widely on contemporary art and its political and theoretical contexts. In 1996 they founded the Hartware MedienKunstVerein, which they directed until 2004.