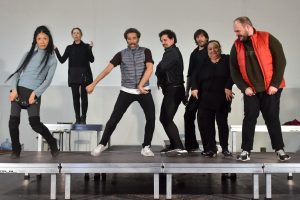 And so it turns out that there is a sense of commonality, of collectivity, of how names dissolve and disappear in the rejoicing of a party. Revellers are no longer themselves, and their loss of self is the party’s gain. We could say that parties are a kind of communism. Dancing with others, bodies moving closer together, closer still, touching, touching so much that they dissolve into each other, an orgiastic movement. How do you dissolve and conserve your singularity? That is a characteristic of jesting: the flamenco fiesta is Apollonian as well as Dionysian. Ca uno es ca uno. We are each who we are. That is why you can touch, fit into the jigsaw puzzle, collaborate, help others. Your belly is too small, have mine. Take my arse, look how it moves! Your arm, your leg, your ear, aren’t enough? Here are mine. I tear out my eyes and lend them to you. All flesh with holes. It is a peculiarity. In the topsy-turvy world of parties, the man carries the donkey, but man and donkey are brothers here. A party, yes, but let’s not kid ourselves. Parties are life itself. Wars are too. A fight. Battle scenes. Just watch how these seven, the seven in our fiesta, confront the space. What can seven bodies resting on a theatre stage rebel against? Against the very ground, against gravity. Architecture is pure dictatorship. They turn everything upside down because they also feel oppressed by the space, by materiality. The structure of a building can be seen most clearly as it burns. Whimsy and revolutionary spiel intermingle in nonsense. It is a party and it is a war against space and against time. So many things! Hate and love of life, at the same time. The same life.

Israel Galván is a flamenco artist and a jondo dancer who has probably broadened the scope of work in the flamenco genre more than anybody else. From the revolutionary Los zapatos rojos (1998) to La Fiesta (2017), he has transformed the performativity of his art: a major paradigm shift, given that his art is dance and flamenco. He has jokingly referred to the evolution of his shows, from people to rabble, from grand show to peep show, an inverted gaze, full of nonsense.