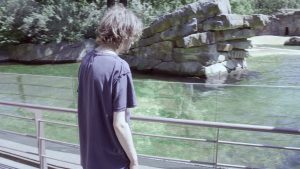 Jan Peter Hammer is an artist who explores narrative practices and their potentialities of critique. When invited to produce a new work for the first edition of Bergen Assembly, Hammer created the video work Tilikum (2013), the point of departure of which was the fatal accident of a trainer working with the eponymous orca at the SeaWorld entertainment park in Orlando, Florida. During his research Hammer came across the story of Daniel Paul Dukes, a homeless man who, in 1999, overcame the safety system of the famous park to spend the night there. His dead body was found the next morning in the orca basin, also killed by Tilikum. One year before his death, Dukes had been arrested when entering, uninvited, the mansion of Richard Gerriot, the inventor of the computer game ULTIMA. It was said that in doing so, he had confused real life and the fictitious world of the game.

In contrast to Tilikum, Hammer’s new video explores Dukes’ case as an example of a lack of ‘emplotment’ (Hayden White), that is, of the capability to assemble a series of events into a narrative, into those patterns and schemas that organise life. A lack of emplotment, therefore, relates to experiences of precariousness or imprisonment. The neurotransmitter dopamine – the level of which in the central nervous system can be increased not only by drugs but also through interaction with computer games and social media – is reflected in the production of narrative structures and emplotment. ‘The complex ways via which dopamine mediates between different brain regions’, says Hammer in his project script, ‘share an affinity with the fields of literature and narratology. Dopamine could thus be described as a literary device.’