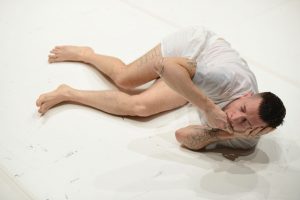 Jeremy Wade is a performer, performance maker, curator and teacher. After graduating from the School for New Dance Development in Amsterdam in 2000 and receiving a Bessie Award for his first evening length performance “Glory,” at Dance Theater Workshop in New York City in 2006, Wade moved to Berlin and since then works in close collaboration with the Hebbel Theater as well as Gessnerallee, Zurich. Recently, Wade has created “Fountain,” “Together Forever,” “Death Asshole Rave Video,” “Drawn Onward,” and “Between Sirens,” exploring the death of man, zombie subjectivity, strange modes of being and feminist strategies of world making to undermine the social codes that define and oppress our bodies. Jeremy premiered a new solo, titled The Clearing, a flamboyant affective engine of solidarity with musician Marc Lohr at HAU2 May 2,3,4 019 and it is currently touring.