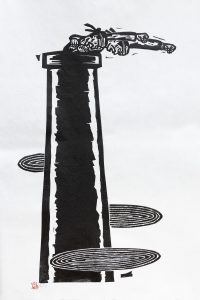 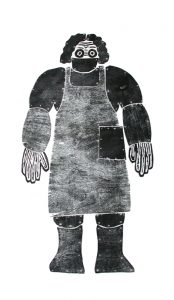 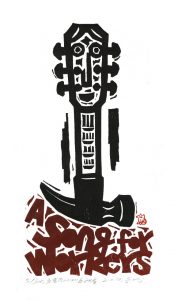 Through participatory works that capture various social landscapes and aspects of South Korean society in woodcut printing, Lee focuses on ‘working people’ – peasants working in the countryside and workers sweating in the factory – as his favoured ‘basic human scenery’. His works echo the anguish and struggles of farmers who were forcibly deprived of their land or factory workers who were kicked out of their workplace, who persisted in their work nonetheless.

Since the 2000s, workers in South Korea have suffered extremely poor employment conditions and constant threats of dismissal. ‘Chaebol’, large corporate conglomerates characteristic of the South Korean economy, have been blaming their workers for management problems caused by corruption, heredity and incompetence. Committing mass layoffs on the pretext of saving dying companies, they terrorize all those workers who resist. Fired workers were unable to withstand the distortions of government and journalism, and they began to claim visibility by climbing and occupying high-voltage transmission towers and factory chimneys in protest. Since 2000, there have been more than 100 chimney occupation struggles in South Korea. Among those, two FineTech workers achieved a record 426 days between winter 2017 and spring 2019 – the longest chimney struggle in the world. Yet despite these fatal struggles, many fired workers are never able to return to their workplaces.

Lee engages in social participatory works, engraving various characters and landscapes on wooden boards. In 2005, he joined the people of the Daechu-ri village, where the community was destroyed in the process of building an enormous US military base. In 2009, he worked at the ‘Yongsan Tragedy’ site, where five people were killed during gentrifying construction work in the city. His woodcut prints of the fired workers’ struggles were sold on the streets for solidarity funds, circulating as posters, t-shirts, banners and postcards, among other things. Yunyop Lee has had more than ten solo exhibitions and participated in various group exhibitions including at the Gwangju Biennale in 2014.