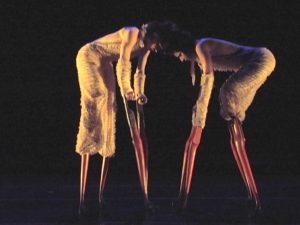 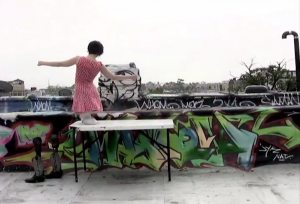 Lisa Bufano / Sonsherée Giles, “One Breath is an Ocean for a Wooden Heart”, 2007, video still

In this performance, the two dancers wear 70-centimetre wooden stilts secured to their arms and legs, constructed from Queen-Anne-style table legs. The stilts utilise familiar everyday objects to enable the dancers to create a basic illusion of table and chair shapes. Through their movements, the dancers
are transformed through a wide range of imagery: animated furniture, magical toys, eight-legged insect, four-legged gazelle and two-legged birds. The effect is an eerie otherworldliness, as two different bodies navigate a movement and sound landscape that is both enabled and constrained by their use of wooden stilts. One Breath is an Ocean for a Wooden Heart was commissioned in part by AXIS Dance Company in association with Alliger Arts and premiered in 2007 at the Extravagant Bodies Festival in Zagreb, Croatia.

Lisa Bufano was an interdisciplinary artist and performer. At the age of 21 a bacterial infection led to the amputation of her feet and fingers. After that time she began experimenting with prosthetics and props in her work. Her predominant theme was the visceral experience of alienation, embodied by creatures, real and imagined. Sonsherée Giles is a dancer, choreographer, teacher and costume designer. Bufano and Giles collaborated on several projects and were both involved for some years with the AXIS Dance Company.

In this short video Lisa Bufano uses the aesthetics of early stop-motion film. It is openly reminiscent of the humour and oddities of Georges Méliès’ cinema of attraction, his references to vaudeville and motion studies, and his filmic experiments with the body – dissecting it and animating its single fragments like autonomous entities. In Bufano’s video it is the artist’s boot-wearing prosthetics that tend to make themselves independent. The pair of legs and the rest of the body are constantly dis- and reassembled, connected to and disconnected from each other. The medical regime and its apparatuses designed to optimise the human body are rejected here for the sake of a body in constant transition. Whereas Méliès clearly aims for spectacle, Bufano’s scenery avoids any dramatisation or spectacle. In this, it counteracts the voyeuristic tradition of the ‘freak show’ as representation of the functionally diverse body.