Artist, counter-tenor and composer M. Lamar works across opera, metal, performance, video, sculpture and installation to craft sprawling narratives of radical becomings. A self-branded ‘Negrogoth’, his compositions draw from the Negro spiritual, folk lamentation, operatic excess, dissonant black metal and gothic opulence, through which Lamar reflects upon the violent histories of colonialism, its traumas and legacies. 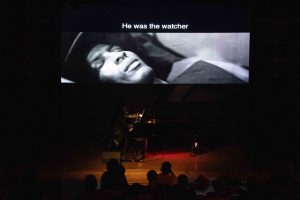 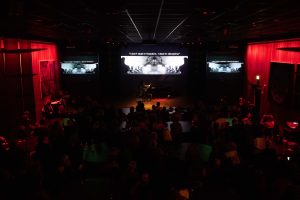 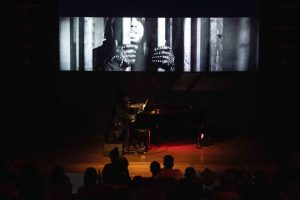 The composition The Demon Rising – for male soprano, piano and projections – is inspired, in part, by the grand jury testimony of Darren Wilson (the white police officer who murdered unarmed black teenager Michael Brown in 2014). The Demon Rising embraces and incarnates white fantasies of blackness as oversized, superhuman and a supernatural menace. At the same time, it charts the black subject’s psychic and mythic odyssey from dehumanising rituals of death toward a self-made re-membering. M. Lamar sings, ‘trying to put ourselves back together we ’re in pieces’. From these pieces, Lamar imagines a new subject emerging from the living and the dead.