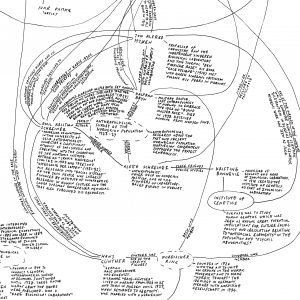 Nordic Race Science is a survey of central figures engaged in ‘race science’ in the Nordic countries between the 1850s and 1945: scientists who were measuring human skulls and living people in order to categorise humans into ‘races’ and place them in hierarchical order. During that time,this pseudo-science was one of the best respected and state-supported scientific disciplines in the Nordic countries. The so-called ‘Aryan-Germanic race’ was regarded as the highest human development and the Nordic scientists placed their own ethnicity within it, or in its close proximity. Class played a role as well in this context. In all Nordic countries indigenous people were an object of research and their oppression was justified by their supposed ‘racial inferiority’ to which this pseudo-science attested.

Alongside the anatomists, Henriksson’s wall drawing includes collectors of human remains, institutions and patrons, as well as artists who produced images of the constructed white ‘Nordic race’ and the ‘exotic others’. Nordic Race Science addresses a topic that has not been adequately dealt with in most of the Nordic countries. Although scientific institutions studying race in Sweden are relatively well known, similar pseudo-scientific projects in Finland and Norway, funded by their respective governments, have been the subject of much less discussion and exposure.

Minna Henriksson is a visual artist who works with a variety of media, including text, drawing and photography. She is interested in covert, deep political processes that appear to be neutral and natural. Nordic Race Science is the result of collaborative research with archaeologist Fredrik Svanberg, and was initially conceived for the exhibition History Unfolds (2016–17) at the Swedish History Museum in Stockholm.