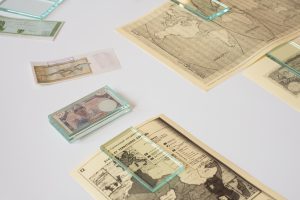 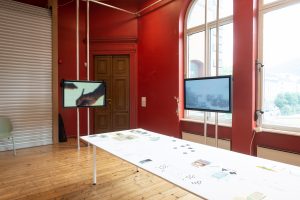 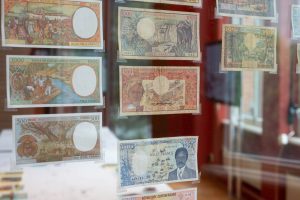 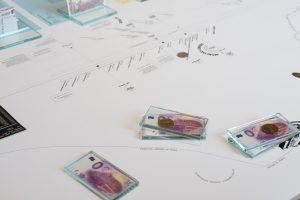 Mercurial Relations is a research project revolving around a colonial monetary construction, a currency called the Franc CFA, which is the currency union that France had installed in its colonies and which still operates today. What does it mean, when the money used in 14 African states is printed, managed and governed by their former colonial ruler? How does that translate to questions of sovereignty? Can we look at the act of (im)printing as a continuous moment of re-inscribing a colonial ideology of power? The production facility of the Franc CFA is situated in the heart of France, right next to a dormant volcano with a (newly restored) Roman temple dedicated to Mercury, god of finance and theft, of trade and trickery, of borders and lies. What role does mythology play in relation to the narratives that the so-called ‘West’ tells itself about its relations with the rest of the world?

The installation comprises a collection of objects and documents displayed on a table, and two videos referring to the production site and process of the bank notes in question. Artistic strategies are therefore employed as a tool to plot global power structures in relation to the economy, legal infrastructures, geopolitics and the so-called post-colonial present.