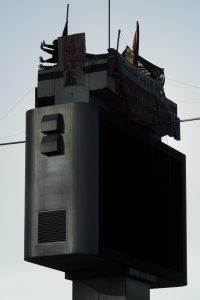 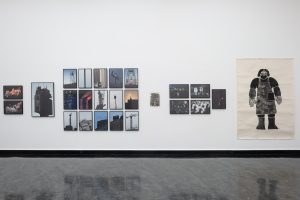 Suntag Noh explores how various social conflicts in contemporary Korean society are linked to the Korean War (1950–53). Through his practice, he focuses on collecting and visualising evidence proving that, although the war ended a long time ago, its impact is far from over. Solo exhibitions include Smells like the Division of the Korean Peninsula at the Kim Yongseob Gallery, Seoul (2004); Red House at Gallery Lotus, Paju (2007); State of Emergency at Württembergischer Kunstverein, Stuttgart (2008); Forgetting Machines at Hakgojae Gallery, Seoul (2012); and State of Emergency II: The Fourth Wall at Art Sonje, Seoul (2017). Suntag Noh’s work has also been part of various group exhibitions, including the 2012 Gwangju Biennale.

Vertigo, 2000–19
Series of photographs on workers’ struggles in South Korea

It was early dawn at Ulmildae, a gazebo on the cliff in Pyongyang, on 29 May 1931. A woman of short stature, dressed in a traditional white jeogori jacket and black skirt, was balanced on a tightrope of woven cheesecloth, crawling precariously over the tiled roof. The height was said to be five metres, but the gazebo was built on an 11-metre-high embankment. A fall would have meant certain death. Indeed, she was prepared to die. The cheesecloth was meant to be used to hang herself. But she changed her mind. She crouched on the roof and greeted the morning. It was only when people flocked together below that she began to cry out: ‘Murderous working hours and low wages! The abuses of factory owners who cut even those wages and fire people right and left!’

The woman calling out the denunciations was Kang Ju-ryong, a worker at the Pyongwon rubber factory. After a protest lasting nine and a half hours, she was arrested by Japanese police. She was fired from her job as a result, but her actions helped workers block a pay reduction. Kang Ju-ryong, who passed away at the age of 31 in a ghetto the following year, was the first of the ‘high-wire protestors’.

More than eight decades have passed since then. Are we living in a different world? The past 15 years have seen more than 100 instances of workers risking their lives to hold high-wire protests on factory smokestacks, traffic monitoring towers, advertising towers, high-voltage transmission towers and bridge piers. Various statistics show that South Korean workers work the longest out of all the OECD countries, yet are faced with poor working conditions and extremely precarious employment. Courts have ruled several times to punish businesses for illegal or questionably legal employment practices and layoffs, but people who are proficient with the law have always been able to find a way around. The powers that be have always sided with business, and business itself has been the power.

At this moment, there are workers who are screaming for life in high and dangerous places somewhere in Korea. Do we ask why these situations keep happening, or do we ask what causes these situations to stop or continue? The question is now one that induces vertigo. Workers who have come back down to earth after a long high-wire protest have often complained of ‘landsickness’. Landsickness is both simile and metaphor. The cries of Kang Ju-ryong from the Ulmildae roof in 1931 and the demands of workers in 2019 meet even today in the skies. Islands have not only existed on islands – there have also been islands on land.