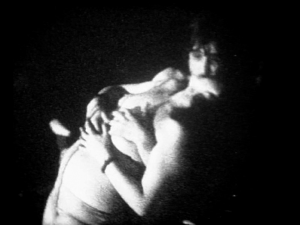 Ocaña y sus muchachas flamencas (Ocaña and his flamenco girls) was the improvised name (not just for the Congress) of the performances carried out by Pepe Ocaña (b. 1947, Cantillana; d. 1983, Cantillana), Nazario (b. 1944, Castilleja del Campo), Camilo (b. 1953, Moguer; d. 1994, Moguer), and other friends who would sometimes freely join this uninhibited, no-holds-barred singing and dancing. These presentations took place between 22 and 25 July 1977 at Park Güell, Saló Diana, and various cultural centres in Barcelona, sometimes as a group, sometimes solo, during the famous Jornadas Libertarias (International Anarchist Congress) held in Barcelona in 1977.

The International Anarchist Congress organised by the Confederación Nacional del Trabajo (CNT) aimed to support the anarchist tradition in conjunction with the new tides of libertarian thought. For example, the publication Barcelona Libertaria, which covered the Congress through the countercultural magazine Ajoblanco, published an article calling for total freedom of sexual practices: homosexuality, bisexuality, heterosexuality. In the midst of this, as an add-on to the official programme, Ocaña and his ballet improvised a full closing party that included Fandangos and fellatio, Sevillana dancing and sex romps, parodic rallies and public urination. The national board of the CNT complained about these acts, but the organisers threatened to resign unless the presentations were allowed to go ahead at the end of each evening. The magnitude of the scandal led Ocaña to coin the term ‘libertataria’, one step beyond traditional anarcho-syndicalism. Ocaña, who had always identified with the anarchists – in endless arguments with his twin brother Jesús, a member of the Communist party, for example – realised that the debate around political freedoms was no longer to be found in the ideological antagonisms of the left. He felt that gender debates were of key political importance and insisted on imposing his own, lewd vocabulary: maricón instead of gay, transvestite instead of drag queen, whore and rent boy instead of prostitute and gigolo. Ocaña declared ‘I’m not a pure gypsy girl, I’m an anarchist gypsy, and I call for amnesty for all faggots’ as he urinated amid applause. ‘The blonde Europeans, who were visiting, and who were supposedly so à la page with everything, couldn’t believe their eyes,’ wrote journalist Karmele Marchante in her account of the events.