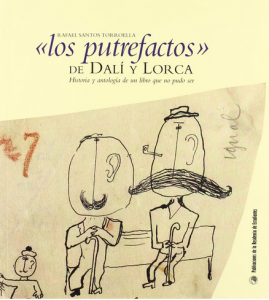 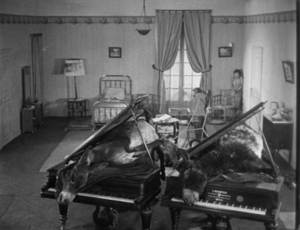 Around 1925, once their time at the Residencia de Estudiantes in Madrid had created links between the work of Lorca, Buñuel, Dalí and the discreet Pepín Bello, the name Los putrefactos emerged as a term for all things stale, bourgeois, mawkish, academic and hegemonic. Their caricatures, humorous texts, poems and dithyrambs united them, almost like a secret society. Luis Buñuel and Salvador Dalí’s famous 1929 film Un Chien Andalou reflects, quite literally – the rotting donkeys on pianos, for example – many of the group’s ideas, although in this case the criticism was directed at one of the group’s founders, Federico García Lorca. As the critic Rafael Santos Torroella argued, homosexual relations were the suppressed content that united and divided the group. And their critique, grounded in this ambivalence, ranged from crude caricature to the political order, always with a festive spirit. It is interesting to observe how an ostensible critique of the established order turned against the critics themselves, imploding and eventually leading to estrangement between Buñuel, Lorca and Dalí. Pepín Bello left various written accounts of how the ghost of Los putrefactos permanently affected the relationship between the three great artists. Thus, traces of these private jokes can be found in masterpieces like Lorca’s Poet in New York (1936–40), Buñuel’s The Exterminating Angel (1862) and Dalí’s The Tragic Myth of Millet’s Angelus (1935–63).

Federico García Lorca (b. 1898, Fuente Vaqueros; d. 1936, Víznar), Salvador Dalí (b. 1904, Figueres; d. 1989, Figueres), Luis Buñuel (b. 1900, Calanda; d. 1983, Mexico City) and Pepín Bello (b. 1904, Huesca; d. 2008, Madrid) were artists, working as such or not, who belonged to the generation of the Republic and were also part of the international avant-garde scene. According to the least well-known member of the group, Pepín Bello, the infamous assassination of Lorca by the Spanish fascists put an end to the Los putrefactos project for good.