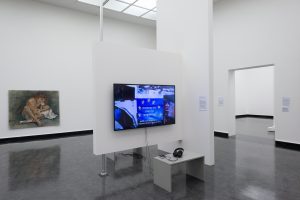 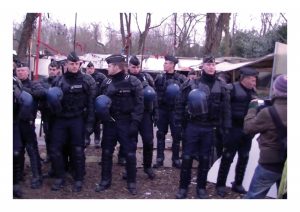 PEROU is a research-action laboratory focusing on processes of urban exclusion. On one hand, it reflects the increasing hostility in cities, and on the other it carries out social and architectural actions to implement hospitality and solidarity. All of PEROU’s efforts are geared towards establishing situations in which there is the possibility for displaced people to come into contact with local inhabitants. PEROU works intensively in the temporary places of displaced people – a radical proposal in the context of housing policies in European cities. In the case of the Roma settlement at Ris-Orangis, the space created was appropriately named the ‘Embassy’, because in reality we are all foreigners. Within this framework, the possibility of a political space for collaboration between Roma, locals, artists, architects, students, etc. was raised. That was when the idea of a party at the ‘Embassy’ came up. Party as event, as something that happens, a given. The video Considèrant… places us at the gulf between two worlds: we see an experience of convergence and collaboration, the improvement of the housing conditions of a displaced community through the joy of working together (the images), while we hear (a text read aloud) an official document justifying the expulsion of this community through an aseptic analysis that defuses all the complexity and richness captured in the footage. If we think of the day on which Israel Galván and his group of Roma artists visited the ‘Embassy’, we can glimpse an idea of the experience. Of course, the audiovisual documentation is only a remnant of an experience that escapes any attempt to measure.