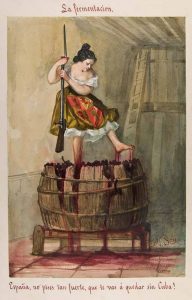 The series of watercolours known as Los Borbones en pelota was born out of a desire to criticise the cabinet (which was more secret than public) of the Court of Isabella II, during a period of liberal government in 19th- century Spain. The series was, in theory, funded by conservatives, and the prints circulated in reactionary circles. Because of the artists involved, the criticism – which was full of pornographic and libertarian references – overstepped the limits of conservative propaganda, and the vignettes were kept out of the public eye. What started out as puritan criticism, with the licentious excesses of the monarchy and the queen’s femaleness used as reactionary signs, overflowed into a carnivalesque critique in which all social positions were subverted and the country’s government was turned upside down. Parliamentary activity, diplomacy and ministerial counsel were all overturned in an orgiastic celebration. The libidinal economy that comes through in the series actually had more to do with the critical spirit of the freethinkers and caricaturists from magazines like El fandango, El cascabel and Gil Blas, which were linked to the liberalism of the Cortes de Cádiz and prefigured a certain Spanish libertarianism with an anarchist bent. The explicit use of pornography, however, defused any possibility of the public use of the vignettes and limited their circulation. The series is part of a critical tradition that runs beneath the surface in Spain and most recently came to light in the censorship of Ines Doujak’s Not Dressed for Conquering at the exhibition The Beast and the Sovereign at MACBA, Barcelona in 2015.

SEM/EN is the pseudonym under which the entire album of vignettes circulated. The series appears to have been started by Valeriano Bécquer (b. 1833, Seville; d. 1870, Madrid) and his brother Gustavo Adolfo Bécquer (b. 1836, Seville; d. 1870, Madrid), one of the first modern Spanish poets. It is likely that many artists had a hand in the series, including the radical Francisco Ortego (b. 1833, Madrid; d. 1881, Bois Colombes). These drawings and texts did not come to light until the critical edition issued in 1991, when they were deposited in the Biblioteca Nacional de España.