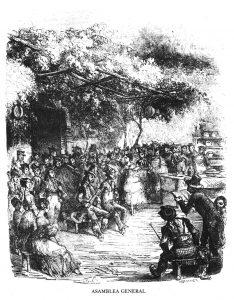 The text of Asamblea general came together between 1838 and 1847 in various ways. The political evolution of its author, Serafin Estébanez Calderón, known as ‘El Solitario’, is reflected in the notes and different print versions of the text. Having started out as a cosmopolitan liberal linked to French and English capital who traded in Jeréz wines and exploited various Andalusian mining interests, Estébanez Calderón became a nationalist conservative after marrying into the family of financier José de Salamanca. Assembled from accounts of several experiences, the notes and the text highlight these changes, from the social notes on the life of the Roma underclass in Estébanez Calderón’s correspondence with Pascual de Gayangos, to the final transformation of the 1847 book Escenas andaluzas into a tourist vignette that paid tribute to Marie Guy-Stéphan, a French dancer hailed by the flamenco Roma of Triana.

What El Solitario had actually attended and observed in his role as government agent was a series of kris, political gatherings of Andalusian Roma in which the communities from Málaga, Cádiz and Seville negotiated various matters, divvied up zones of influence, arranged family unions and settled sundry disputes. These kris were also parties in which there was no distinction between political, economic and festive spheres. To describe a political assembly and a festive banquet in a single text, Estébanez Calderón used a language full of obscure, learned anachronisms and lumpen jargon, to the point that some parts took on the complex form of a tongue-twister. As Goya was considered the artistic ideal that could capture the scene in the accompanying vignettes, one of his followers, Francisco Lameyer, was commissioned to illustrate the text.

Serafín Estébanez Calderón and Francisco Lameyer, author and illustrator respectively of Asamblea general, were among the artists who formed part of early 19th-century bohemia in Spain. Critics have often considered them costumbrist and even orientalist, but in truth the work of both artists is a direct and critical testimony – the first controversy with Mérimée, for example – of the life of the new urban underclass that would, particularly in Andalusia, create the field of expression that came to be known as flamenco.