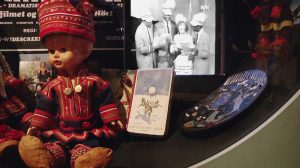 Siri Hermansen is a Norwegian filmmaker, photographer and installation artist. Through her artistic practice she investigates unforeseen affects in societies that are undergoing deep economic, environmental or cultural changes.

Paragraph 108 of the Norwegian Constitution says: ‘The state authorities are required to make provision to ensure that the Sámi peoples can retain and develop their language, their culture and their social life.’ This paragraph, which was added to the constitution in 1987, is regarded as important security for the preservation of the culture of the Sámi people. Nonetheless, their culture is threatened by economic interests that covet the rich natural resources in the northern hemisphere.

Apology draws on King Harald’s official apology to the Sámi people at the inauguration of the Sámi Parliament in 1997: ‘The Norwegian state is founded on the territories of two peoples – the Norwegian and the Sámi … Today we must apologise for the injustice the Norwegian state once imposed on the
Sámi people through policies of norwegianisation.’ Through this official statement, King Harald exercised political power, surpassing his constitutional role as King of Norway, a role which is meant to be symbolic and non-political. He thereby delivered a juridical tool to the Sámi people of Norway.

The video work also includes conversations with the former president of the Sámi Parliament Ole-Henrik Magga, law professors Kirsti Strøm Bull and Carsten Smith, and author and activist Marion Palmer. Additional footage from the exhibition on the traditional life and culture of the Sámi people at the Tromsø Museum shows the Deep River Boys and Nora Brockstedt performing the song Voi Voi. With this song, about a Sámi girl, Brockstedt represented Norway for the first time at the Eurovision Song
Contest in 1960.