Once Upon a Time There Was Savorengo Ker, the Home of Everyone, 2009
Video, 57′
Directed and produced by Giorgio de Finis and Fabrizio Boni with the support of Stalker/Osservatorio Nom 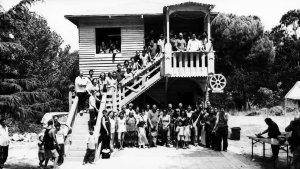 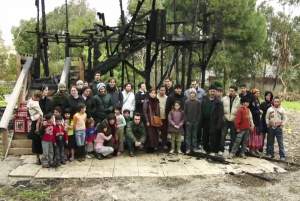 The relationship between the Stalker collective and the Roma people is not without conflict. The practices of Guy Debord’s dérive – walking and wandering – are some of the main tools of this group of artists and architects, who come across Roma populations on their rambles around the edges of cities, particularly migrants of Roma ethnicity who ended up in Italy, on the outskirts of Rome, fleeing from the Balkan War, or in later waves of migration after Romania and Bulgaria joined the European Union. Stalker has worked with Kurdish exiles, with Syrian refugees and with sub-Saharan migrants, but the peculiarity of their work with Roma communities springs from their inherent resistance to assimilation, to losing the group identity and the traditional social practices that unite them. They do not only resist the disciplining action of the welfare state: even the best-intentioned humanistic practices trigger their distrust. In view of this, and given the strong similarity of their processes (Stalker and the Roma people both use nomadic practices, informal architecture and a psychogeographic approach to the use of space), it is interesting to see how they negotiated their various periods of cohabitation. Stalker decided to work with these ‘New Babylonians’, as Constant called them, with all their ecumenical power, by inviting Kurdish immigrants and the Roma community, for example, to live together in a singular, open, ‘house of all’. The project brought into play concepts of dweller and dwelling – which are standardised in the deterministic architectural processes of cities – questioning and problematising them. Celebration was a cohesive way of bringing these communities together (a Kurdish-Roma wedding, a banquet with Latin Americans and Roma, festive openings, and so on). In this light, the reverse-celebration, the fire that destroyed Savorengo Ker, the failure of the project, can be a model for understanding these practices. Only fire allows us to clearly see the structure of the building.

Stalker/Osservatorio Nomade (Giulia Fiocca, Lorenzo Romito) is a collective that has been working since 1995, often in collaboration with the architect Francesco ‘Piccio’ Careri and the anthropologist and documentary filmmaker Giorgio de Finis. In response to hostile government policies, in the face of incipient European racism, they put up an exemplary resistance front. Savorengo Ker is a lucid analysis of the community of the future: the development of the ‘house of all’ does not necessarily lead to utopia. The book On: Campus Rome (Altrimedia Edizione, 2017) compiles most of Stalker’s work with the Roma community.