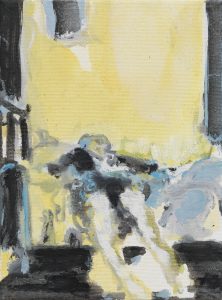 Valérie Favre works in an openly experimental manner. Her paintings develop over the course of several years in large series and work cycles.

This series of small format paintings unfolds as a multilayered study on the representation of acts of terminating one’s own life. The diffuse, sketchy and sometimes abstracted paintings refer to both general forms of committing suicide and concrete cases enacted by anonymous, famous or fictitious persons ranging from Lucretia, Ophelia and Ajax to Ulrike Meinhof, Alexander McQueen and Marilyn Monroe. Some paintings refer explicitly to suicidal scenarios from art, theatre or cinematic history, while others are assigned dispassionate words such as ‘in the gas oven’, ‘with hunting rifle’, ‘frontal against a tree’, or ‘hanging’. Each painting is credited with a short note indicating, more or less concretely, its narrative context. Ideologically motivated suicides are included, such as kamikaze or suicide attacks, while others do not reveal the motivation behind the fatal action.

Difficult to identify, the protagonists appear only as shadows or phantoms. Surrounded by and merged with the translucent layers of a seemingly disappearing environment, they are captured at the threshold between life and death. The focus is on the act that effects the self-decided moment when life turns to death, and on its dramaturgy. Avoiding spectacle, the paintings offer both empathy and distance in regard to their subject.