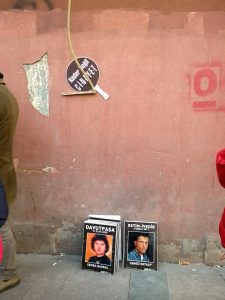 3.3.2019, 81st Vigil for Justice and Conscience foran hovedkvarteret til one hope association / in front of the headquarters of One Hope Association, photo by Banu Cennetoğlu

Murder Not Accident documents the collective struggle against ‘work-related serial murders’ in Turkey. In 2018, at least 1,872 people died due to preventable causes while working. The annual death toll of occupational diseases is estimated to be at least six times this figure. None of these deaths are registered as work-related and most of the victims of work- related violence remain unnamed. This is a state of emergency – corporate crime and social murder, which remain deliberately ignored by the government and state entities. In 2008, a group of families mourning loved ones, victims of work- related murders,
came together. They translated their shared grief into a demand for justice. They named their network Workers’ Families Seeking Justice (WFSJ) and gave the victims a name in this struggle:

“We are the families of workers who lost their lives in preventable work-related accidents and occupational diseases, the root reasons of which are duplicated in each new death. That is why we call them ‘work-related murders’. Those who are responsible for them – highest-ranking executives and officials of corporations and public bodies – were never exposed to a just judicial process and continue to enjoy full impunity. We are mourning together and our claim for justice is to ‘remember the dead and fight for the living’.’

The Support Group, a solidarity network of urban planners, architects, lawyers and other activists from Bir Umut Derneği (One Hope Association), based in Istanbul, share a common cause with the Workers’ Families. Since May 2012, on the first Sunday of each month, the Families and the Support Group have held a Vigil for Conscience and Justice on Galatasaray Square in the centre of Istanbul. The vigils were held there 74 times and were banned on the 75th occasion. The reasons given for the ban were the precise
ones for which the families have fought for so long: ‘national security, public order, the protection of public health’.

Yet Workers’ Families Seeking Justice hold on to their demand. Concurrently, since 2012, the Support Group has published seven almanacs about the murders, tracing the national press coverage and some local, non-published sources as well as highlighting the families’ demands for memory and justice.