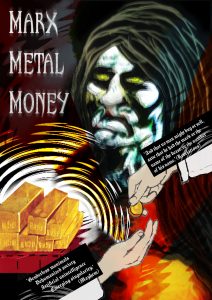 ‘The citizenry of the towns used money as a carpenter uses his plane: as a tool to level political inequality. Wherever a personal relationship was replaced by a monetary relationship, a rendering of goods by a rendering of money, that was the place where a bourgeois pattern took the place of a feudal pattern.’
Friedrich Engels, ‘The Decline of Feudalism and the Rise of the Bourgeoisie’

‘With the extension of commodity circulation there is an increase in the power of money, that absolutely social form of wealth always ready to be used. Since money does not reveal what has been transformed into it, everything, commodity or not, is convertible into money […] Nothing is immune from this alchemy, the bones of the saints cannot withstand it.’
Karl Marx, Capital (229)

Dean Kenning’s talk will utilise drawings to describe Marx’s theory of money, and its role in the historical shift from feudal relations to those of industrial capitalism. If exploitation is direct under feudalism’s ‘natural’ hierarchies, it becomes hidden in a capitalist system of ostensibly equal economic agents exchanging their commodities ‘freely’ on the market. The talk will describe how the capitalist extraction of surplus value from labour is made possible through the ‘commodity fetishism’ which develops as money is established as the universal form of value.

Enda De Burca’s talk/presentation will use images to look at Marx’s theories of primitive accumulation and the expropriation of the agricultural population which is the repressed material narrative of the political economist’s idealism.

The presentation will look at Marx’s challenge to Capital and the political economy in relation to Norwegian black metal and it’s challenge to Christianity and to mainstream commercialised culture.

“….the historical movement which changes the producers into wage-workers, appears, on the one hand, as their emancipation from serfdom and from the fetters of the guilds, and this side alone exists for our bourgeois historians. But, on the other hand, these new freedmen became sellers of themselves only after they had been robbed of all their own means of production, and of all the guarantees of existence afforded by the old feudal arrangements. And the history of this, their expropriation, is written in the annals of mankind in letters of blood and fire.”
Karl Marx Capital (875)

Capital Drawing Group’s ongoing project is to illustrate Karl Marx’s Capital in an attempt to understand and visualise the complex and abstract economic and political forces that dominate our lives, and to think through alternatives. The group uses drawing as an ‘embodied’ way of reading – as a way of digesting and activating the reading of this famous body of work and the thinking it provokes.