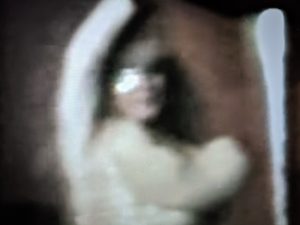 The regular work of Julio Jara, artist, poet and performer established in Madrid since the eighties, focuses on the homeless, on immigrants with drug abuse problems and on transgender refugees. He carries out this work for a religion based institution in Madrid called Martín de Porres. Los mil y un cartón is one of his works based on an open collection of narratives on how individuals spent their first night outdoors.

The Romans gave us the legal system, but whenever a decree was passed in the Senate, a roost of prophetic chickens would have their say on the fate of this or that law. This relationship with magic mediated by chickens has often been parodied. And this is precisely the point of departure for the collaboration between Pedro G. Romero and Teresa Lanceta, an artist who has been weaving rugs for many years. The two had met and laughed about Martin Kippenberger’s Chicken Disco (1953–97). Now they have spent months researching the perception of chickens, the way they understand space and time, in order to weave a rug that will hold them.

The Saturday walk takes as a starting point the idea of the guided tour at a gallery or museum. For this tour, Murat Deha Boduroğlu and Banu Cennetoğlu from the Bergen Assembly core group will join, offering their perspectives, opinions and experiences to the group and offering the opportunity to listen and learn from the perspective of the ‘maker’. At the end of the walk, we will gather at Belgin for coffee and cake. Sitting together around the table, we will have the chance to gather our thoughts, collectively or individually, reflecting upon our experience.

Nordic Race Science is a survey of central figures engaged in ‘race science’ in the Nordic countries between the 1850s and 1945: scientists who were measuring human skulls and living people in order to categorise humans into ‘races’ and place them in hierarchical order. During that time, this pseudo-science was one of the best respected and state-supported scientific disciplines in the Nordic countries. Alongside the anatomists, Henriksson’s wall drawing includes collectors of human remains, institutions and patrons, as well as artists who produced images of the constructed white ‘Nordic race’, and the ‘exotic others’.

Mercurial Relations is a research project revolving around a colonial monetary construction, a currency called the Franc CFA, which is the currency union that France had installed in its colonies and which still operates today. What does it mean, when the money used in 14 African states is printed, managed and governed by their former colonial ruler?  The production facility of the Franc CFA is situated in the heart of France, right next to a dormant volcano with a (newly restored) Roman temple dedicated to Mercury, god of finance and theft, of trade and trickery, of borders and lies. What role does mythology play in relation to the narratives that the so-called ‘West’ tells itself about its relations with the rest of the world?

The Parliament of Bodies (PoB) gathers again in Bergen: Within Bergen Assembly 2019’s opening days, the Society of Friends of Lorenza Böttner calls for an extraordinary meeting to question the idea of artistic and political action as based on strong, virile, healthy and medically normalised subjects. Thus, the PoB mutates into the Impossible Parliaments, challenging the standard model of the assembly as a series of acts of communication between equal ‘able bodies’ destined to achieve consensus.

Taking as their starting point the work of artist Lorenza Böttner (1959–1994), the Impossible Parliaments call into question normative distinctions between sickness and health, and focus on specific knowledges and practices of those historically considered ‘sick’, ‘fat’, ‘dysphoric’ or ‘deficient’.

We invite the city of Bergen and visitors of Bergen Assembly 2019 to join the Parliament for a joyfull celebration of vulnerabilty and somatopolitical dissidence.