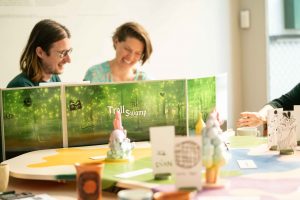 Troll Swamp is a large-scale board game for multiple players, based on the formats and characters from the popular tabletop game Dungeons and Dragons.

The game has been developed and tested with various groups in Bergen, and utilises role-play and teamwork in order to act out scenarios against online trolling.

Through the analogue nature of the game, a playful situation emerges where one plays an imaginary character. Guided by the Dungeon Master (a storyteller guiding the players through the game), each player will face their own online habits as well as their relationship with others. Troll Swamp has the potential to enable its players to regain confidence, rethink dynamics of interaction and reclaim a different space of expression online.