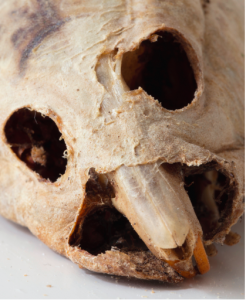 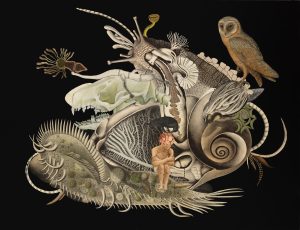 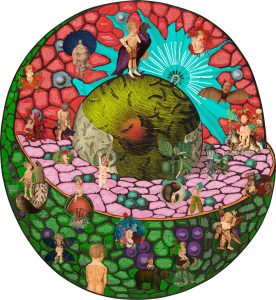 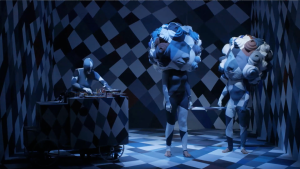 b. 1959, Klagenfurt, Austria. Lives in Vienna, Austria and London, UK

Ines Doujak, born 1959, is an artist who researches, writes and teaches in the areas of visual culture and material aesthetics with a queer-feminist, anti-racist, anti-colonial focus. She lives in Vienna and London. Barker and Doujak collaborate on various projects.

This sculpture combines wall charts and paper paste models: twoand three-dimensional visualisation techniques used in biological education that were developed in Europe in the 19th century. The two-dimensional figure giving birth to a diseased potato is based on a collage of drawings from medical books displaying skin diseases. These books represent par excellence the aestheticmedical construction of monstrosity, blending fascination, horror and visual pleasure. The transgender potato-parturient stands on an oversized, three-dimensional, mummified rat – the animal which in European narratives appears as the epitome of the fear of disease transmission, most prominently in Bram Stoker’s Dracula, drawing on the dreaded return of the repressed peoples of the continent’s colonial past.

Via a QR-code system the sculpture offers a repertoire of new songs dedicated to current workers’ struggles, written and interpreted by various artists. The songs will also be played aloud daily at 11am, 1pm and 4pm. The sound emitting from the sculpture evokes another well-known figure of Europe’s imaginary, the Pied Piper of Hamelin, whose music not only seduced rats but also the town’s children.

Merging the shapes of a cell nucleus, the internal structure of the Earth and of brain cells, this carpet reads like an encyclopaedia and cosmology of the current routes, logics and infrastructures of death politics ranging from drug to organ trafficking, from labour exploitation to war, from the deadly rejection of refugees to the destruction of the planet. This dystopian world is inhabited by miraculous beings in-between the human, the animal and the botanical.

In today’s world, desperation is an economic force. Entire populations uproot and flee in the direction of the faintest glimmer of hope, only to find themselves in the worst of predicaments: abandoned and deported, sold, abused or stigmatised forever, they end up circulating as extremely cheap and disposable commodities. It is this economics of despair that Ines Doujak offers a glimpse of in her baroque collages. They show people with skin diseases drawn in gory detail, from 19th-century medical textbooks, including sources from the collection of the Leprosy Museum in Bergen. Their spoiled beauty is near-impossible to look at, and thus all the more hypnotic. These images are accompanied by a research-poem comprised of numbers and prices quantifying the massive extent and outrageous economics of people drawn into human trafficking, the organ trade, prostitution and slavery. Church and state add to the misery with mass sterilisation and forced adoption programmes, closing borders at exorbitant costs and abandoning minors on the other side to meet their fate, only to revel in the shocking images of the victims, prepped and amplified for our consumption.

Masterless Voices is a musical based on the themes of carnival, utopia, and rebellion. It begins with a singing mountain. Once, European explorers climbed the Andes on the backs of indigenous carriers. Fed up with the exploitation of its resources, the mountain dons a skirt and sets out for carnival. Masterless voices sing their unforgiving songs in the dark, sparks fly, and working women tell us that they are not dressed for conquering. A shameless investigator – sometimes naked and sometimes dressed in camouflage – goes out and about among the carnival masses in Bolivia and finds herself with a group of Brazilian Baile Funk dancers. She does not regret anything.

Read More
To be announced soon.