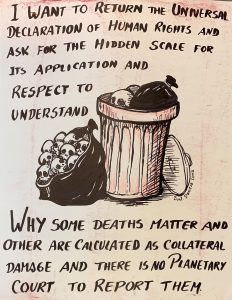 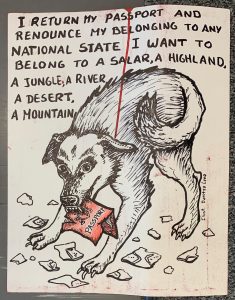 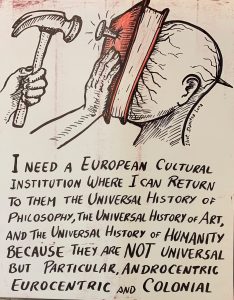 
‘I am a whore, I am a lesbian, I am Bolivian. I can only exist constructing prohibited alliances between these discursive and political positions that are supposed to be in contradiction with each other. I speak up from the site of torture and violence, but not to give testimony, but rather to imagine happiness from a position of disobedience.’

These are the words of self-introduction by María Galindo, an artist, performer, activists, writer and the co-founder of the Bolivian collective Mujeres Creando. Over the past 15 years Galindo has created a radical artistic practice, bringing into conversation the subaltern practices and knowledges of indigenous women and the political and literary traditions of anarchism, punk and non-white feminism.

But what can art do in a context of authoritarian neocolonialism in which the logics of feminism and indigenous identity politics have been absorbed within humanist, religious and neoliberal discourses as new strategies of control? María Galindo answers by displacing art from the market and the gallery and bringing it back, right to the place where it was born: the public square, the social ritual. Against the racial and sexual purification of the body, her work exorcises the terror of colonial history by means of a bastard and iconoclastic theatricalisation of Catholic and patriarchal symbols. Against the capitalist economy of exploitation and ecological destruction, her artistic animism uses ‘cheap and broken’ objects and bodies, investing them with new life as totems of a poetic revolution to come that aims to challenge our conventional modes of perception and our desiring economies. Galindo’s morethan-art practice belongs to a lineage of poetic activists in which we could also locate the works of Pedro Lemebel and las Yeguas del Apocalipsis, Ocaña, Miguel Benlloch, Sergio Zevallos, Beau Dick, Lygia Clark, Michel Journiac, Ulrike Ottinger, Annie Sprinkle and Beth Stephens, Vala Tanz and Guillermo Gómez Peña.

The collection of posters shown at the exhibition are the result of María Galindo’s participation in the Parliament of Bodies in June 2019, with the action la piel de la lucha, la piel de la historia (the skin of the fight, the skin of history).